Home
Books
A Million Miles in a Thousand Years

A Million Miles in a Thousand Years 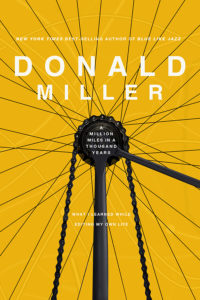 A Million Miles In A Thousand Years: How I Learned To Live A Better Story

Starting today I plan to add a new step to my whole reading a book-writing about said book-logging into my library-placing book in my library process. The minute I start reading a new book I will write inside the book the “how I came to purchase/receive the book” because for me that information is part of the whole cool reading and learning experience. I am a firm believer books do not come to you by accident.

For the life of me I can’t remember where I saw Donald Miller’s name. Of course, it doesn’t help that I am reading several books at the same time, which means I could easily get confused as to the source behind learning about and becoming interested in said Donald Miller. I don’t know about you, but I am one of those that do pay attention while reading other books or blog posts or magazines. When I see a book title or a person that inspires me, I do a Google search and see what I can find. This is how I came to know all about Donald Miller. Well, mostly all about, for I have not had the pleasure of meeting Mr. Miller as of yet, but do hope to in the near future. After reading about him on Wikipedia (http://en.wikipedia.org/wiki/Donald_Miller_(author)), I immediately went to Barnes and Noble website and ordered this book! After reading this book, okay, actually before I finished reading this book I knew I would want more of Donald Miller and his words, so I ordered two more of his books; Blue Like Jazz and Scary Close (More to come on these two another time, stay tuned). You can check out his website at; http://storylineblog.com/to see all of the awesome stuff he and his team are up to.

The title is quite interesting. Mr. Miller’s “voice” is crazy good. I love reading his work. It’s almost like he is sitting across from me telling me his stories in person. Perfection! I love his humor and wit. I do believe he and my hubby would get along fabulously. He has some notable folks endorsing his book, which says a lot right there, Anne Lamott and Max Lucado to name two. His honesty blew me away and his various quests inspired me greatly. I enjoyed his story being told as a story in story language!

After his first memoir came out, Mr. Miller went through a season of doubt and discouragement, until two movie producers make contact with him. They wanted to turn his memoir into a movie. We the readers, get to journey with him as he shares his experiences. Prepare yourself for a seriously intriguing read.

Here are some of my favorite parts:

“In Adaptation, Nicholas Cage plays a screenwriter with writer’s block, so he attends one of Robert McKee’s seminars. McKee is played by the actor Brian Cox. He’s pacing onstage holding a cup of coffee, a giant movie screen behind him, and he’s lecturing with intensity, saying screenwriters should never use voice-over narration, and they shouldn’t think their movie could work without an essential structure. And then somebody at the seminar asks a dumb question and McKee slowed to stop. He spoke to the woman in a voice that makes people turn white. He spoke to her until she began to cry, practically. I made a mental note not to ask the real Robert McKee a stupid question, or for that matter, any questions at all” (p. 40-41).

The whole part about his friend Jason agreeing to build an orphanage before he spoke to his wife or family about it, because; “if we were going to tell a good story, it would have to involve risk” (p. 52). His wife and daughter were upset at first but then they loved the idea. His wife told him she was proud of him and his daughter broke up with her then boyfriend because he told her “she was too fat” (p. 54). Jason said, “No girl who plays the role of a hero dates a guy who uses her. She knows who she is. She just forgot for a little while” (p. 54).

“And once you know what it takes to live a better story, you don’t have a choice. Not living a better story would be like deciding to die, deciding to walk around numb until you die, and it’s not natural to want to die” (p. 66).

“He said our interaction with each other, with the outside world, and with intangible elements such as time made us different people every season. His conclusion was that the human body displayed physical evidence that we are not the same person we were when we were kids, or even a season before. He said we think we are the same person, but we aren’t. “People get stuck, thinking they are one kind of person, but they aren’t.” For instance, Marcos said, “the human body essentially recreates itself every six months. Nearly every cell of hair and skin and bone dies and another is directed to its former place. You are not who you were in February,” he told me” and “we were designed to live through something rather than to attain something, and the thing we were meant to live through was designed to change us” (p. 70).

“And that’s the first time I realized that the idea a character is what he does makes as much sense in life as it does in the movies. I thought about my friend’s story from his wife’s perspective. She only knows what he says and what he does, not what he thinks and what he feels” (p. 73).

As usual, I have many pages ear-marked. There are so many other words and stories that I learned from and connected with. I encourage you to get a copy of his book for your own library. By clicking on the book above, you can order your own copy right this second. I also added this book to my “Favorites” section on the “Books” page. I believe you too will become a fan of Donald Miller.